Skip to toolbar
Blog
You are here: Home1 / Blog2 / Bold Women Blogging3 / An Open Letter from a ‘Bossy’ Woman

Today, a friend sent me a screenshot of an Instagram story from a mutual acquaintance. It was a rambling tirade which detailed views on what it means to be ‘masculine’ and ‘feminine’. It is a baffling, waffly account which seems to imply that women are ‘naturally designed’ to not take risks, instead we are undisciplined, weak, and lazy. It rails against the phrase ‘toxic masculinity’ as another attack on men designed to undermine them, to give them an excuse for laziness and to ‘attach [themselves] to feminine traits’.

So here is my open letter as a response, because I want to set a few things straight. 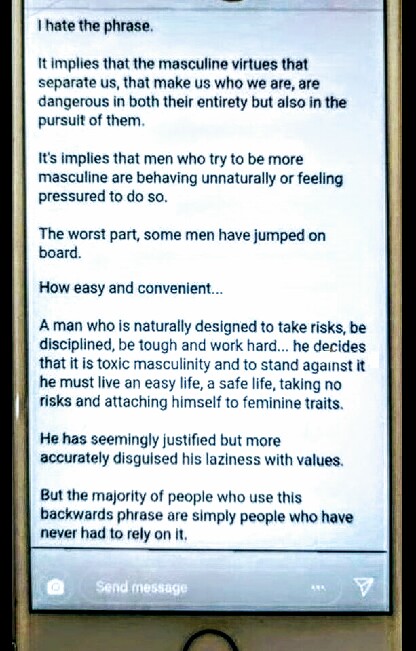 Understandably, several of my female friends had a lot to say on the subject of your Instagram story, and the views which you obviously agree with. They

are an inspiring group of women, and each of them, in their own ways, is strong, successful, and extremely capable. All of us are breaking into industries that have historically been dominated by men. When I tried to come up with ways in which to describe these amazing women the words ‘inspiring’, ‘dedicated’, ‘intelligent’, ‘bold’, and ‘unwavering’ came to mind. These are not ‘gendered’ traits.

What even is a gendered trait? ‘Sassy’ and ‘bossy’ are words usually employed describe women. What is a bossy woman? Someone who takes charge? Someone who knows her own mind? Someone who is capable and strong? Why, in 2018, are we still using gendered terms to describe personality traits found in all genders? Why does ‘bossy’ seem to have a negative connotation?

Why are men supposed to be strong? Dedicated? Driven? Why are these supposedly ‘masculine traits’? Is a single mother, a female judge, a female academic, a female doctor, producer, costumer, activist, MP, businesswoman, retail employee, nurse, carer, or human rights lawyer not strong? Are they not dedicated, hard-working, or driven?

Toxic masculinity does exist and it is harmful for everyone. It is one of the reasons why, in the UK, suicide is the biggest killer of men under the age of 35. The phrase ‘toxic masculinity’ is not an attack on men. It is an attack on the stereotypes that society forces on to men. Why is it seen as feminine to cry? Why is the implication of this that showing your emotions is a sign of weakness? It is not a sign of weakness. It’s just being human.

I am continually baffled that some people, of any gender, seem to think that feminism is an inherent attack on men. Feminism, at least of the type to which I subscribe, is about gender equality. It’s about standing up for everyone. It’s about bodily autonomy, it’s about equal opportunities, and it’s about not being told you should be one way or another just because of your gender.

And the sad and frustrating fact is that people who identify as female do not have some basic human rights. In this country, if I become pregnant as a result of rape, and I terminate that pregnancy, I could face more time in jail than my rapist. This is, of course, if my case against him even goes to trial. I cannot make basic decisions about my own body. And I am called ‘bossy’, ‘hysterical’, or ‘feisty’ when I try to raise my voice and speak out against the injustices I face.

When I walk alone at night, I clutch my keys in my fist. I check over my shoulder every few meters. I pick up my pace when I hear people behind me, or see them on the other side of the street. I walk in well-lit areas, I park in well-lit areas and I lock my car doors as soon as I get in. I have even second-guessed the really cute skirt I’ve just put on.

I don’t make eye-contact with men on the street, because if I do I’ll sometimes be told to ‘smile’. Why do you think I’m so angry? Why do think that I don’t want to give him a smile? Why am I a street decoration? An ornamental flower pot. When men so regularly touch women without our permission is it any wonder we might not want to smile at them? Because if we do, they might see that as an invitation.

I don’t understand why you would describe men as ‘naturally designed to be disciplined…and work hard’. What does that say about how you view women? You might see me a weak, lazy, undisciplined baby-factory. Who is supposed to give up a career, who should not being pursuing a PhD because one day I’ll be a mother. Why is that my life? Just because of some accident of birth that gave me a vagina rather than a penis? Why would you be naturally more dedicated, capable, and driven than my friends and I? You are not.

Can we just stop with the whole ‘masculine’ and ‘feminine’ traits? Can we all just be people? Regardless of gender, or anything else? How can a set of traits define half the population of the world? It just does not make sense. If men strive to be more masculine because they see traditionally ‘feminine’ traits as inherently bad then this is toxic masculinity and it is as harmful to you as it is to me.

I ask you to open your eyes. Look around you. Really look. By perpetuating these ideas of what it means to be a man, you are also saying what you think it means to be a woman. Look at the women in your life and see if your argument stands up. I bet it won’t.