Skip to toolbar
Blog
You are here: Home1 / Blog2 / Bold Women Blogging3 / The ‘clear gender gap’ in NI driving test pass rates has nothing to do ...

The theory test is automated and so much less likely to be influenced by cultural biases, however the practical test, which women fail consistently more than men, is administered and marked by a person. We all have bias, much of it unconscious and so the diversity of examiners really matters. I attempted to find out the gender breakdown of Driving Test Examiners in NI by calling the DVA. However, six transfers and phone calls later I was only able to ascertain the numbers for Belfast. The figure was not encouraging. 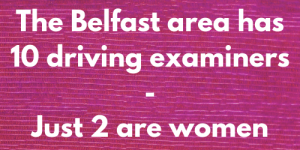 The fact that 80% of the driving examiners for the Belfast area are men may go some way to explain why men are 8% more likely than women to pass at the Belfast (Balmoral) centre and 12% more likely to pass at the Belfast (Dill Road) centre. It is a well-worn patriarchal trope that women are worse drivers than men. These attitudes permeate through society and can cause perception bias where we expect to have our preconceived notions confirmed. It is therefore possible that more women are failing the practical test because the examiner is already expecting this and may be more vigilant than if they were examining a man’s driving.

The fact that women are better drivers than men also casts suspicion on the lower pass rate. Men are much more likely to cause a death or injury while driving and are four times more likely than women to drive under the influence of drugs or alcohol.

Women are statistically such safe drivers that insurance companies were willing to offer women up to 50% cheaper premiums (this changed in 2012 following a ruling made by the European Court of Justice). It was only commercially viable to do this because the risk of insuring women was so much lower than insuring men.

So…    Women have a higher pass rate in the theory exam than men and are statistically safer drivers than men. The disparity in practical test passes clearly isn’t attributable to women drivers’ skills. Could it be the higher number of male examiners and society’s pervasive bias against women drivers? Perhaps the DVA could look into offering anti-bias training for examiners and explore why so few examiners are women.

Hellos and Goodbyes in Lobbying
Scroll to top