Alliance for Choice have collected testimonies from people who have encountered anti-choice protests through an online portal since January 2020. Commenters often spoke of being nervous seeing the protestors and feeling intimidated and scared. There were many reports of ‘protesters’ blocking the entrance to clinics, shouting including using loudspeakers, and recording clients. Some of the testimonies collected by Alliance for Choice include:

“Approx. 20-30 protesters the last day I saw. One man with a microphone and loud speaker roaring about hell and sin. All with placards of foetus’ or big black writing saying babies are murdered here.”

“Uncomfortable and trapped. There were protesters on each side of the road as well as the road opposite the clinic. The person recording also made me feel uncomfortable.”

The protests also had an impact on people who were not even accessing abortion: “I had an appointment in a solicitors office across the road from John Mitchell place Newry, I was so scared entering hill Street Newry.”

Many commented on the graphic images held by those outside clinics and how this was very distressing, particularly for people who had also experienced miscarriage:

“Extremely intimated, I have PTSD from a complicated birth after I suffered a miscarriage and these images are so traumatising I’ve been waking up soaked in sweat and my nightmares have returned constantly running round a hospital searching for my baby.”

“The pictures made me sick to my stomach. They are incredibly distressing to view. The thought that this woman with the clipboard was there to harasses women accessing health care shook me to the core. My distress was exasperated by the fact that it was the day after the report on Mother and Baby homes was released.”

The principles underpinning our support for this Bill are simple; abortion is healthcare, it is now legally accessible, and nobody should endure verbal abuse to access it, any more than they would any other health treatment. Similarly, no worker should be subject to intimidation, abuse or harassment while accessing their place of work.

Pro-life does not have to mean anti-choice: Supporting the continued criminalisation of abortion is not pro-life, it is anti-choice 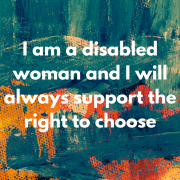 Nothing About Us Without Us! Rights of d/Deaf and Disabled Women
Scroll to top