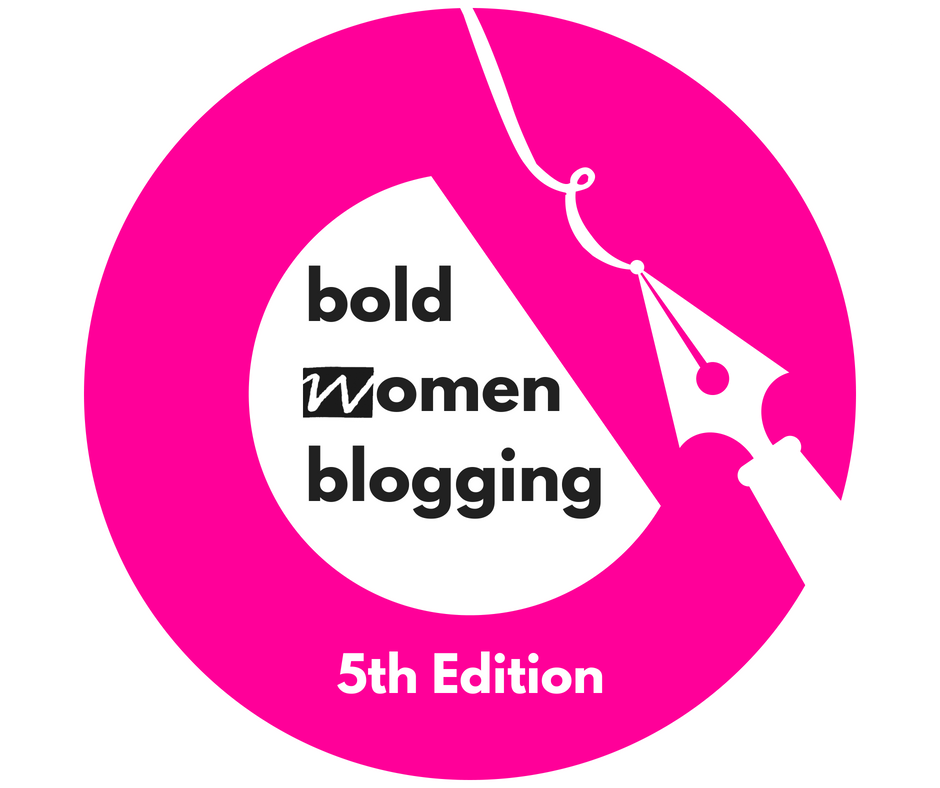 A couple of weeks ago the Sunday Times printed an interview with Poldark actor Aidan Turner that attracted a considerable amount of coverage over the following days, most of it centred on the discussion of his diet and exercise regime. While filming the most recent series of Poldark he would routinely fast throughout the day, not eating until 7pm, and work out every day, and sometimes twice a day, during this fasting period. Clearly this is a pretty extreme approach, so it’s hardly surprising it was picked up a lot in the press and on daytime TV, what was surprising to me was the tone of these conversations. Any commentary I’ve seen has more or less begun and ended with the affirmation that “he does look great!” and something reflecting the notion that this behaviour is demonstrative of a kind of macho determination, an admirable commitment to his work and his body. Nowhere have I come across anyone expressing any concern about the idea that this sort of behaviour might be a sign of a relationship with eating, exercising, and your own body that is not entirely healthy or desirable, or that it might not be a good pattern of behaviour to promote.

“I guess people think that I care about my body a lot. I try to keep healthy, but it’s not an obsession”.

We are living in a boom-time for strange and restrictive eating patterns, the much-maligned clean-eating movement and various free-from alternatives are widely marketed as healthy choices to people who needn’t be restricting their diets and this is representative of a problematically skewed approach to health and wellbeing more generally. #fitspo and #cleaneating posts tell us we’re not chasing thinness or anything so superficial as “the perfect body”, we know better than that in 2018 – we’re better – this is about our health and so to be so preoccupied with diet and exercise is responsible and right, these behaviours are elevated to the moral high ground and are therefore beyond reproach. This is such a dangerous aspect of our current culture, when wellness is aspirational any number of unhealthy behaviours might be committed in its name. Furthermore, the picture of healthy living and wellness that is most often promoted to us, both in mainstream media and social media, is not an inclusive one and the more we look it’s hard not to see this as just another arena where we promote a narrow set of ideal characteristics and behaviours, that are much more concerned with a very restricted and prescriptive notion of physical beauty than they are with positive physical and mental health, at the expense of all others. Turner’s comments are born out of this cultural atmosphere, the fact that he describes this behaviour as “keep[ing] healthy” and that assertion is not questioned is reflective of some very harmful messages that many of us have unwittingly internalised about what a healthy body must look like and the behaviour that constitutes a healthy lifestyle.

At this point it’s important for me to make it clear that I’m not here to criticise Aidan Turner, nor to try and claim that I have any more insight into his relationship with food and body image than any TV or newspaper reporter. I don’t believe that it’s his responsibility to be a good role model for a healthy lifestyle, and I’m fully sympathetic to the fact that he’s been exposed to the same cultural influences as the rest of us that skew our perceptions of what a healthy body looks like and what it is reasonable to do in its pursuit. He is under more pressure than most to achieve this ideal, but I do think it’s concerning that he’s able to pass this behaviour off as a normal part of “keep[ing] healthy” with no further questions asked. I think it’s important that we have a conversation about the way we think about and talk about this behaviour, and how that differs when we are talking about men and women. 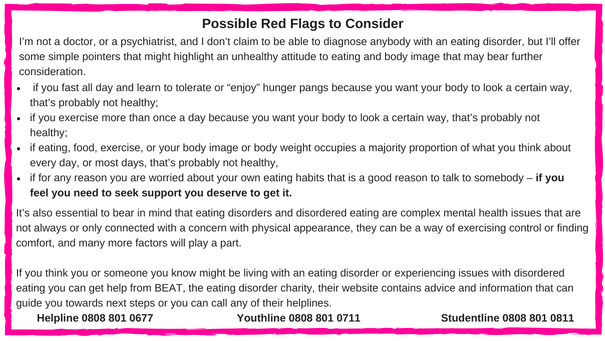 The general media response to Turner’s comments in the Sunday Times interview reflects a couple of very unpleasant aspects of gender politics in 2018. I think it’s unlikely that a woman in the public eye making the same comments would have been met with the same response, rather, she would be criticised for her irresponsibility, and for promoting unhealthy diet and exercise habits to vulnerable young girls. This reflects the double-edged nature of the way that women’s bodies are policed in the public sphere, wherein they are expected to adhere to specific and demanding beauty standards while making it appear effortless, never referencing any of the unpleasant or unreasonable behaviours they are required to engage with in order to attain these standards, and it confirms that a serious mental health issue is still being patronisingly reduced to a silly female problem, a diet gone too far. Aidan Turner can talk about these extreme behaviours and be congratulated for his display of strength and endurance without anybody asking whether it makes him a good or bad role model, while a woman in the same position might have faced reproach for irresponsibility, mental fragility and unhealthy obsession, because ultimately women and girls are considered to be at risk of eating disorders while men and boys are still not. In this case, this meant that boys and men who may be dealing with eating disorders or body image and disordered eating issues saw these unhealthy eating behaviours positively affirmed by every media outlet reporting on the story, and those who may be concerned about their own similar behaviours had those concerns trivialised. It is unacceptable that our society’s perception of masculinity did not permit any of those media outlets to consider the effect of their reporting on vulnerable men and boys.

Eating disorders are not a women’s issue, they’re not a diet, they are a group of serious mental health issues that often require treatment and the persistent stereotypes that surround them make it harder to reach the many sufferers who don’t fit the mould, and get them the help they need. Anorexia has the highest mortality rate of any psychiatric disorder and the number of male sufferers is likely much higher than we realise or expect, insensitive reporting won’t do, we ought to be doing everything we can to dismantle harmful stereotypes, rather than reinforcing them. 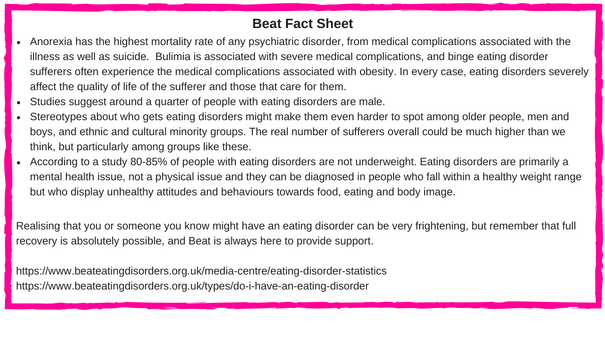 Claire’s Story: This is why we need affordable childcare
Scroll to top