Skip to toolbar
Blog
You are here: Home1 / Blog2 / Bold Women Blogging3 / My Mum’s experience with a paramedic who didn’t trust her to... 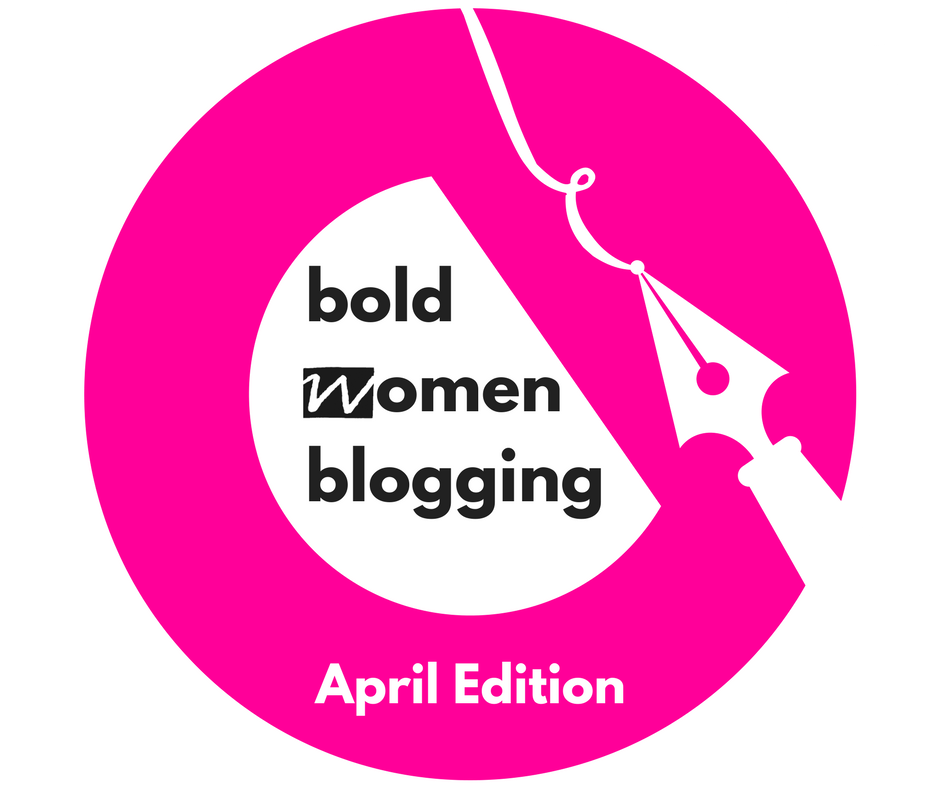 I want to start this blog by saying that in the past year I’ve had more contact with the National Health Service than I’ve ever had in any other year, and certainly more than I would have liked, and while there are undoubtedly criticisms I would level at various elements of the service overwhelmingly I feel happy and grateful to live in a country that has an NHS, I value it highly and I feel strongly that it should be defended against those who seek to corrupt it with privatisation. NHS care, at its best, makes a huge difference in many lives every day and all of us know people who wouldn’t be able to live as they do without it. This story is not a criticism of the NHS nor of the numerous NHS staff who are truly doing their best with what they’ve got right now. It is only the story of one incident and a consideration of what this might tell us about the experience of women in the hands of healthcare services in the NHS and elsewhere and how a gendered and stereotyped approach to those women impacts upon the care they receive.

At the end of last year I was with my mum when she had a fall that resulted in a serious injury. It wasn’t a simple fall, she was attempting to pull my recently-disabled dad’s wheelchair over the threshold going into the venue of an event they were supposed to be attending when the wheelchair tipped over backwards, with my dad in it, and landed on top of her. Watching this I felt sick. I’d had enough time in hospitals this year already and I couldn’t gauge how serious her injuries were. Dad is a big man and she inherited her own mother’s brittle bones so I knew it was serious. Immediately things started moving. A group lifted dad in his chair, people who claimed to have some kind of first aid knowledge encouraged her to move herself and she refused. I wanted to get hold of my sister. I needed to know what was wrong with my mum. I was so angry she hadn’t asked for my help with the wheelchair, I’d asked her to call me when she arrived but she hadn’t and I was waiting less than 20 feet inside when I saw the accident happen. When my sister arrived she went into shock, my unflappable sister who doesn’t cry cried and panicked and asked me why mum wasn’t moving – could she? I answered honestly. I didn’t know if she could move. I only knew that she had terrible pain at the base of her spine and if she was refusing to move that was good enough reason for me to leave her where she was until she had proper help. I trusted her. If I had been the one to call the emergency services there would have been no doubt that she needed an ambulance, I could see that very clearly.

I didn’t make the emergency call. Somebody from the venue staff did and must have painted a picture very much different to what I saw. They didn’t send an ambulance. They sent a paramedic car to administer some pain relief and get her back on her feet, as well as making sure dad was okay. I insisted he did get checked out, though he was adamant he was fine. It had only been six months since his stroke and a bump to the head on his blood thinners could cause a haemorrhage. All of this went round in my head while I questioned what kind of injuries my mum was dealing with, and somewhere in the background as I tried to comfort dad I could hear her voice, irritated and sarcastic, “If you want me to wail and cry and beat my hands off the floor I can do that – is that what it takes?” The paramedic attending mum had asked her to rate her pain on a scale of 1-10 and she had responded that whenever she tried to move it was an 8.

She didn’t say her pain was 100 out of 10, or 12 out of 10, she didn’t even say it was 10 out of 10. She evaluated her own pain, as she was asked to, and rated it as being 8 out of 10 specifically when she was trying to move. Considering the pain and the distress that she was experiencing, lying on the floor in a public place at the feet of her husband’s wheelchair, trying not to think about the kind of permanent damage that might leave her unable to walk, and at the same time hoping that his blood pressure wasn’t rising in panic and leaving him in danger too, this seems to me to have been an eminently reasonable response.

My mum reacted in that situation as so many of us would. She was in a public place, her recently disabled husband was beside her unable to help, her daughters and many people she knew were around. She was trying her very best to retain a sense of calm and control and dignity, and to protect my dad from the panic I know she felt, while still communicating very clearly how serious she believed her injuries might be. But her reaction didn’t match up to the gendered expectations of someone who was supposed to be her care provider and his prejudice had a tangible impact on the care she received that night. A moment’s consideration of my mum’s present circumstances could have illuminated why she might respond as she did, and why that response might seem entirely appropriate to her, or even the idea that she might be reacting strangely because of the shock. Surely it was part of his duty of care to her to take her estimation of her own pain seriously and to consider why his expectations may not be being met in this case? But he couldn’t divorce any of that from his own perception of a pretty blonde woman who wasn’t crying.

He continued to question her representation of her pain for some time, including, of course, asking her to compare it to childbirth. At this point he had no idea whether we were her biological children or whether we might have been born by caesarean, and at any rate having never actually given birth himself it is unclear to me why he thought that his conception of what that might be like would be a more useful tool for determining her pain level than listening to what she was telling him – 8/10 when I try to move should have been good enough. The gendered approach that he insisted on was entirely inappropriate and unhelpful and the decision he made not to trust my mum’s assertions of her own pain levels and not to take seriously her concerns about the severity of her injuries caused so much unnecessary additional distress, not only to her, and significantly delayed her getting access to the care and treatment she knew she needed. So much time was wasted while he attempted to cajole her into just getting up and moving about, as though he seriously thought she would be willingly lying in a doorway if she was capable of doing anything else. Throughout this time mum was given an incredible amount of heavy-duty pain relief and she continued to assert firmly that movement was unbearable for her, that the pain made her frightened. Very clearly she felt that she had to stay still to keep herself safe, her fundamental instincts told her that much, yet in the end she lay on that floor for over an hour before an ambulance arrived to take her to hospital.

I went with mum in the ambulance. Someone else took dad in their car, my sister went home with friends who promised me they would look after her tonight. I’d already got a change of clothes and an overnight bag for the hospital, I’d called work to say I wouldn’t be in tomorrow and my boyfriend was going to stay at home with my dad who couldn’t be alone. We had settled into crisis response mode, mum’s determined will to stay calm had allowed us to do what we needed to. As I waited with her in ambulance arrivals that calm that she’d been battling to hold on to disappeared. She was shaking and crying and struggling to catch her breath, so terrified that any of the ill-advised attempts at moving her might have resulted in serious damage to her nerves or spinal cord. She asked me to find out if they could give her something to calm her down and when I asked I was told that she’d had so much pain relief this evening that it wasn’t possible for them to give her anything, and still the pain had only been lessened and not taken away. Throughout the night whenever it was possible to give her more pain relief they did, at one point they had to adjust the position of her bed by about 15 degrees and she screamed in a way that made me want to scream too. Repeatedly she was tapped and poked to make sure that she had feeling in her arms and legs and had no pins and needles. In the middle of the night when a doctor came to give us the results of the scans and started by saying that it was bad news we were both terrified, but when he went on to say that she had fractured her spine I honestly felt relieved. We already knew that, and really it was the best we were hoping for. I couldn’t understand that anyone would be surprised. 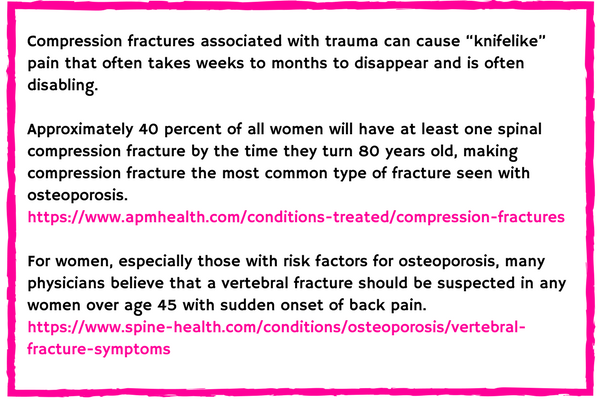 To offer some context on the extent to which my mum wasn’t exaggerating about her pain that night, the first day in hospital it took her, myself and her physiotherapist twenty minutes just to get her out of bed, and when she was discharged a week later she went home to three months wearing a back brace, relying on carers calling four times a day for all her personal care and meals, sleeping in a hospital bed and taking oxycodone, an opioid painkiller, every day. A little research for this piece has confirmed that mum’s injury was not a surprising or unlikely one in the circumstances, it could have been predicted and her concerns absolutely should have been taken seriously. Given the paramedic who first attended her had the benefit of knowing her age, and the fact that she was taking calcium tablets for osteopenia, as well as her repeated assertions about the intensity of the pain she was experiencing, there really wasn’t a good excuse for the dismissive attitude he took to her representation of her symptoms.

Ultimately mum was so lucky, and I am so glad, that she had the strength and the confidence to trust herself and to stand up for herself when faced with such doubt from someone who was supposed to be an authority, but really she should never have had to bear so much of that responsibility in the circumstances. This story serves as a reminder for all of us of something we’ve probably already found out, that as women we have to represent and defend our own interests at all times, sadly we can’t always trust that anyone else is going to do this for us, even when they should. Hopefully it might also encourage us to consider what we expect of those who look to us for help or support in so many situations and how we can better respond when our expectations are not met, as necessarily sometimes they will not be, to ensure that we don’t allow these prejudices to do the real harm that we know they can.

Childcare For All Campaign
Scroll to top