You are here: Home1 / Resources2 / Events

We are excited to announce a new series of events highlighting sections of the community who are underrepresented in our membership and creating accessible routes to activism for our members.

WRDA in Conversation with Julie-Anne Corr-Johnston and Eileen Weir 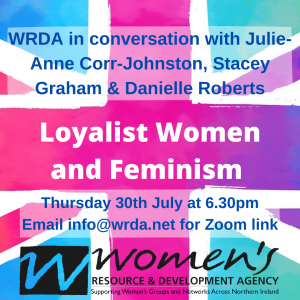 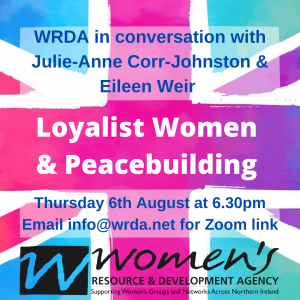 Julie-Anne Corr-Johnston (Jules) is a former Belfast City Councillor. Her election in 2014 broke new ground, not just for the Oldpark constituency – where she became the first female Unionist to represent the area in Local Government – but also for Political Unionism, having been its first openly lesbian designate. Having lost a seat on the City’s Council last year, Jules now works as an educational support worker in the voluntary and community sector and in her free time offers political analysis on current affairs.  She lives in North Belfast with her wife, two year old twins and their rescue cats.

Eileen Weir is a well-respected community development practitioner with over 30 years extensive experience in building Good Relations, Community Capacity, supporting community cohesion and strategic community development. Eileen is currently employed by Shankill Women’s Centre as the Greater North Belfast Women’s Network Co-Ordinator funded by the Community Relations Council and TEO/North Belfast Good Relations Programme. Eileen also works within West Belfast with a wide range of community organisations and women’s groups and is currently working towards creating a West Belfast Women’s Network.
Eileen is the Chair of WISPA (Women In Sport & Physical Activity) and sits on the board of “WRDA” “Reclaim the Agenda”, “The Civil Rights Committee” as well as involvement in a wide range of other activists groups.
In 2018 Eileen received two prestigious awards the first presented by CRC Community Relations Council “Exceptional Achievement Award” and the second the “McCluskey Civil Rights Award” for her role in Human Rights, Civil Rights and Peace Building activities and has been highlighted in the media over the last number of months.

Danielle Roberts has been working on a PhD project at UU researching barriers to PUL women’s political participation, and now works in the LGBT sector. Danielle is also involved in feminist activism with Belfast Feminist Network and Alliance for Choice, and co-organiser of the annual Reclaim the Night Belfast march against street harassment and gender based violence. 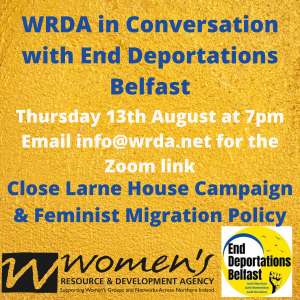 We will be discussing Larne House, what it is, why it needs to go and how you can help with the grassroots campaigning group, End Deportations Belfast. We will also look at the Hostile Environment and strike a hopeful note for the future by discussing what a Feminist Migration Policy might look like.